In an asthmatic person, the narrowing of the airways occurs in response to stimuli (triggers) that usually do not affect non-asthmatic people. Among these triggers:

An asthma attack can be triggered by many inhaled allergens, such as pollen, particles derived from dust mites, secretions from cockroaches, particles from animal feathers and fur. These allergens bind to immunoglobulin E (IgE, a type of antibody) on the surface of mast cells to stimulate the release of asthmogenic substances (this type of asthma is called allergic asthma). Although food allergies can only rarely induce asthma, certain foods (such as shellfish and peanuts) can trigger severe attacks in sensitive individuals.

Reactive Airways Dysfunction Syndrome (RADS) is a rapid-onset and persistent asthma-like disorder that develops in patients with no history of asthma. It is a form of environmental lung disease caused by a single strong exposure to nitric oxide and volatile organic compounds (such as those contained in certain bleaches and cleaning products). The patient develops symptoms similar to those associated with asthma, with coughing, wheezing and shortness of breath. The treatment is similar to that generally adopted for asthma. 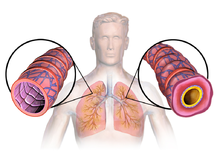 Asthma attacks vary in frequency and severity. Some asthmatics are usually asymptomatic, with sporadic and short-lasting mild episodes of wheezing. Others experience coughing and wheezing and have severe attacks after viral infections, physical activity, or exposure to other triggers.

With wheezing there is a musical sound that can be found during the expiratory phase. In some subjects, cough may be the only symptom (variant of asthma with cough). Some asthmatic patients have clear and sometimes thick (sticky) sputum.

In some cases, asthma attacks occur mainly at night (nocturnal asthma). Asthma attacks that occur during the night may indicate poor disease control.

Symptoms of an asthma attack

Asthma attacks are more frequent in the early hours of the day, when the effects of protective drugs disappear and the body has difficulty in preventing the narrowing of the respiratory tract.

An asthma crisis can begin suddenly, with wheezing, coughing, and wheezing. At other times, the asthma crisis may arise slowly, with gradual worsening of symptoms. Either way, people with asthma often notice wheezing, coughing, or tightness first. The attack can end after a few minutes or it can last for hours or days. Itchy chest or neck can be an early symptom, especially in children. A dry nocturnal or exertional cough may be the only symptom.

During asthma attacks, dyspnoea (wheezing) can become severe, generating a feeling of deep anxiety. The subject instinctively sits upright and leans forward, using the neck and chest muscles to breathe, but is still looking for air. Sweating is a common reaction to effort and anxiety. Generally, the heart rate becomes more frequent and the person may feel a sensation of chest pressure.