Pneumonia is an inflammation of the lungs caused by bacteria, viruses, fungi and other microorganisms. They cause the small air sacs in the lungs to become filled with fluid produced by inflamed tissue.

More common in the old and young

Pneumonia occurs more frequently in non-industrialised and less developed countries.
The incidence of pneumonia is highest at the extremes of age, both in very young children and in elderly adults.
Viral pneumonias are usually mild, but they can be life-threatening in very old and very young patients, and in people whose immune systems are weak.

The severity of pneumonia depends on which organism is causing the infection.
Common symptoms of pneumonia include cough, shortness of breath, fever and malaise.

What is Legionnaires’ disease? 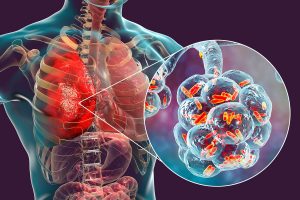 Legionnaires’ disease (LEE-juh-nares) is caused by a type of bacteria called Legionella.
The bacteria got its name in 1976, when many people who went to a Philadelphia convention of the American Legion suffered from an outbreak of this disease, a type of pneumonia (lung infection).

Although this type of bacteria was around before 1976, more illness from Legionnaires’ disease is being detected now. This is because we are now looking for this disease whenever a patient has pneumonia.

Each year, between 8,000 and 18,000 people are hospitalised with Legionnaires’ disease in the U.S. However, many infections are not diagnosed or reported, so this number may be higher. More illness is usually found in the summer and early autumn, but it can happen any time of year.