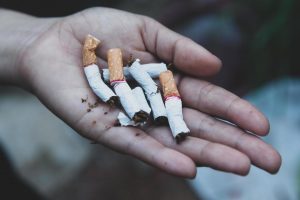 Environmental tobacco smoke (ETS) is also known as “second-hand smoke”, “passive smoking” or “involuntary smoking” (breathing in the smoke from nearby smokers).

Passive smoking is a universal and almost unavoidable problem, as nonsmokers can be exposed at home, in public places, at work, etc.

What is Environmental Tobacco Smoke?

A cause of respiratory disease

ETS is a proven risk factor for lung cancer, asthma attacks in those already affected and worsening symptoms of bronchitis in adults.
It is also responsible for recurrent respiratory illnesses, asthma and lung function impairment in children.
It is estimated that approximately one third of lung cancers in nonsmokers result from passive exposure to cigarette smoke.
ETS can also cause shortness of breath, airway irritation and coughing.

The risk of developing respiratory disease in children increases in direct relationship to parental smoking habits, with the greatest risk being when both parents smoke.