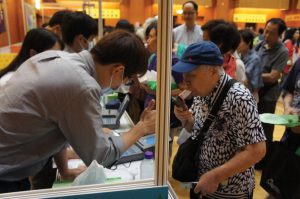 The ERS/ ELF Spirometry event is run every year in an attempt to raise awareness of chronic obstructive pulmonary disease (COPD) and lung health.

Wir holen luft or “We draw breath” was the slogan for the 2009 Spirometry event, which took place in Vienna, Austria during the 19th ERS Annual Congress.

The event was held in front of the Vienna state opera at the Herbert von Karajan Platz; the same location used in 2003 when the ERS last held a Congress in Austria.

Viennese residents and visitors to the city had the opportunity to have their lung function tested for free in one of the 12 testing booths. Nurses and doctors were available on site for further advice.

The ERS and ELF were very honoured to share the company of Alois Stöger, Federal Minister of Health and Sonja Wehsely, Vienna City Councillor for Health and Social Matters, during the opening ceremony.

Local journalists also attended to hear the latest views on the state of lung health in Austria.Extensive media coverage leading up to and during the event helped to attract a vast number of people and a total of 1,657 tests were achieved over 2 days.

Local radio hosted a five-part awareness series to explain about COPD, how it affects a person’s lifestyle, early diagnosis and treatment, and the current situation in Austria. 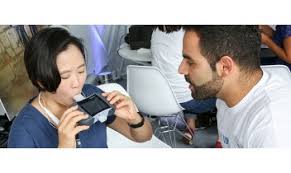 A total of 15.2% of people tested showed some level of abnormal lung function; something that they may never have realised if they hadn’t taken a lung test. Our event encouraged these people to seek further advice and support from their doctors to improve their quality of life.

A spirometry bus was organised by the Austrian Respiratory Society as a separate initiative in the weeks leading up to the ERS Congress. The bus toured Austria and tested nearly 5,000 citizens. Together with the efforts of the ERS/ELF event, this joint campaign reached many people in a country where there has been little activity towards smoking prevention.

An example of “how to take a test” was filmed during the event to explain what to expect if you have never taken a test.

The ERS and the ELF would like to thank the following partners for their essential assistance with the spirometry event:

The Vienna Congress Chairs, who have devoted so much of their scarce time to organising the event.
– The volunteer nurses and doctors, who did the actual work of testing and explaining to the public.
– The generous financial support of Boehringer Ingelheim GmbH.
– The contribution of equipment, training, time and effort from ndd Medizintechnik AG and Aerocrine AG.
– Dr. Bannert Public Relations who organised the complex logistics of the event.
– Alois Stöger, Federal Minister of Health and Sonja Wehsely, Vienna City Councillor for Health and Social Matters for attending the event and expressing their views on lung health in Austria.
– Café Sacher for hosting the breakfast meeting with local journalists.
– Österreichische Gesellschaft für Pneumologie (ÖGP)/Austrian Society of Pneumology (ASP) and Österreichische Lungenunion for their practical assistance.
– ORF Wien, Österreich 1 (radio), Austrian Press Agency (APA), Kronen Zeitung, Kurier, Der Standard (online) for the extensive media coverage.
–
X-audio/the soundbakery for the production of the Spirometry film.

– The local shops in Kärntnerstrasse for displaying flyers to promote the event.