Air is breathed in through the nose, mouth or both. 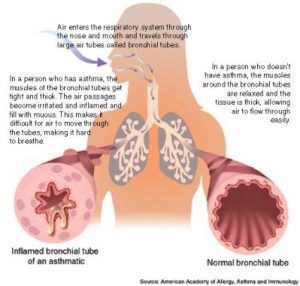 The nose is the best route for air to get into the lungs, as it is a better filter than the mouth. The nose decreases the amount of irritants that reach the lungs, whilst also heating and adding moisture to the air.
Mouth breathing is usually needed when exercising or when more air is needed, because the nose is not the most efficient way of getting large amounts of air into the lungs.

Journey down the windpipe

Route into the lungs

The end of the trip

The bronchioles end in tiny air sacs called alveoli. Alveoli, which means “bunch of grapes” in Italian, look like clusters of grapes attached to tiny breathing tubes. There are over 300 million alveoli in normal lungs. If the alveoli were opened and laid out flat, they would cover the area of a doubles tennis court. Not all alveoli are in use at one time, so the lung has many to spare in the event of damage from disease, infection or surgery. 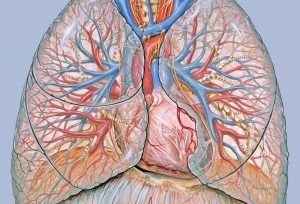