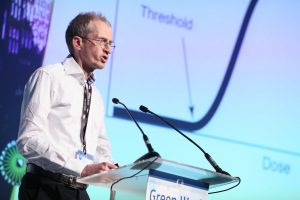 The 2007 European Lung Foundation Award was presented to Professor Bert Brunekreef, who has devoted much of his working life to the study of air pollution and its effects on our health.

Professor Brunekreef received his award on September 15, 2007 during the opening ceremony of the European Respiratory Society Congress, which was held in Stockholm, Sweden.

Working in first Wageningen and now Utrecht, in The Netherlands, Professor Brunekreef has helped to author more than 300 peer-reviewed scientific articles, as well as organising conferences, giving lectures and advising organisations such as the World Health Organization, among many other activities.

In the 1980s, Professor Brunekreef carried out an important study on the effects of fine particulate matter (PM10) pollution, which helped to create the first 24-hour air quality standard for this type of pollution. This led to many further studies into fine particulate pollution and to recent European laws on the subject.

Professor Brunekreef has also studied the effect of damp homes on children as they are growing up. He found that children in damp homes in the USA were more at risk from asthma than other children. His work on traffic pollution, which looked at the effects on children living near busy roads, has been very influential in encouraging more research and attempts to reduce children’s exposure to pollution.

As one of the world’s top air pollution experts, Professor Brunekreef was asked in 2002 to write a review of the effects of air pollution for the journal The Lancet. This has become one of the most widely read articles on the subject. (Register your details on The Lancet’s website and read the article.)

As well as carrying out his own scientific work, Professor Brunekreef has helped to nurture the next generation of pollution scientists. So far in his career, he has supervised 27 young scientists through their doctoral degrees, and he has worked with many scientific journals to publish other scientists’ research.

His work on investigating the effects of pollution and helping to make sure that this knowledge is used to change the law have made Professor Brunekreef a worthy winner of the European Lung Foundation Award.