Tiny blood vessels or capillaries surround every air sac in the lungs. The blood vessels surround the alveoli like a net, and this is where oxygen enters the blood and carbon dioxide leaves. 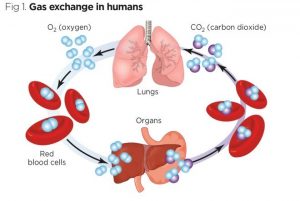 The lungs also have two sets of blood vessels. Blood vessels can be arteries or veins. One set of blood vessels feeds into and nourishes the lung, whilst the other set is responsible for transporting oxygen from the lung to the body via the heart.

Oxygen around the body

Blood that has collected oxygen from the lungs goes to the left side of the heart and is pumped around the body to deliver oxygen-rich blood (called arterial blood). After the blood has delivered oxygen to the cells of the body (skin, organs, etc.) it is called venous blood, and returns to the right side of the heart. Venous blood contains high amounts of carbon dioxide and small amounts of oxygen. The venous blood returns to the lungs to get rid of carbon dioxide and to pick up oxygen.

When the lungs are unable to take in enough oxygen or oxygen is blocked from getting into the blood, the lung tries to protect itself by shutting down some blood vessels. The heart then has to pump the same amount of blood as usual through fewer blood vessels. This puts added stress on the heart. The back-up of blood causes the heart to work harder and often results in the heart becoming enlarged. This is termed cor pulmonale or right heart failure.