The European Influenza Surveillance Scheme (EISS) and the European Centre for Disease Prevention and Control (ECDC) have collected data on influenza activity in Europe over 8 winters (1999-2007). 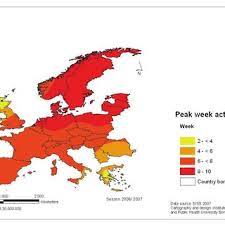 The total area covered in the scheme includes a population of about 450 million people. This type of surveillance helps researchers find a vaccine that will be effective against circulating viruses and to prepare for pandemics. The main aim of the scheme is to improve knowledge of how influenza spreads to strengthen healthcare protection resources.

Over the period of 8 winters, the average length of a typical flu season was nearly 4 months. Usually the epidemic starts in the west and spreads towards eastern Europe, possibly because Western Europe is most populated and has a greater amount of commuting and air travel, which contribute to the spread of the virus.

From January 2008, there has been a dramatic increase in the number of influenza cases in Europe. Countries experiencing a significant amount of influenza activity include: Austria, Bulgaria, France, Hungary, Ireland, Italy, Luxembourg, The Netherlands, Portugal, Slovenia, Spain, Switzerland and the United Kingdom.

As an example of how influenza varies from year to year and how it affects different age groups, the two graphs on the right show the progress of the 2007-2008 influenza season in Italy and compare it with previous seasons.

Seasonal flu is thought to be responsible for between 40,000 and 220,000 extra deaths per year in Europe.