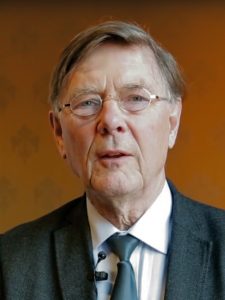 This year the European Lung Foundation award went to Professor Albert Osterhaus, one of the world’s leading virologists, in recognition of his ground-breaking research into the viruses responsible for avian flu and severe acute respiratory syndrome (SARS) and human metapneumovirus: Professor Albert Osterhaus was presented with the European Lung Foundation award during the opening ceremony of the ERS congress on Saturday, 2 September, 2006.

Professor Albert Osterhaus began his academic life as a vet, before gaining his PhD in virology in 1978.  Thirty years of experience in both animal and human virology have developed his specific interest in viruses that develop from affecting only animals to affecting humans as well; viruses that cross the species barrier. Osterhaus is now a leading world authority, able to identify dangerous and elusive new viruses with speed and precision.

It was Osterhaus and his team who reacted with exceptional speed to the SARS outbreak of 2003 and identified the responsible coronavirus within days.  This allowed the World Health Organisation to effectively diagnose and isolate suspected cases immediately, and as a direct result of Osterhaus’ determination, passion and commitment SARS was brought under control and countless lives were saved.

In 1995 Osterhaus and his team silenced sceptics when they proved that Avian Influenza (commonly known as bird flu) could be transferred to humans in the form of the H5N1 virus.  On the basis of this discovery Osterhaus has enabled health authorities to prepare for potential outbreaks, and, as an individual, Albert has campaigned determinedly for awareness, calling for a global taskforce to prepare for and combat viruses such as H5N1.

Throughout his professional career Osterhaus and his team have identified around twelve ‘new’ viruses, as well as countless new possible hosts; different species that can now contract old viruses.  As part of his tireless active interest in public health Albert has acted as PhD mentor, written over 500 academic articles, created biotech companies and held several editorial positions.  The continuous and groundbreaking work of the so-called ‘virus hunter’ has helped prevent and control the spread of deadly viruses and will continue to do so, saving countless lives and changing the face of world health today.  It is both Osterhaus’ outstanding scientific achievements and his commitment to improving the future of health care that make him such a worthy recipient of this award.