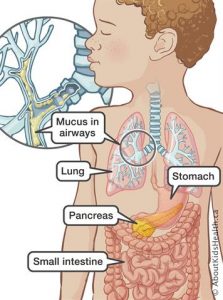 Cystic fibrosis (CF) is a common genetic (inherited) disease, which primarily affects the respiratory and digestive systems in children and young adults. The gene responsible for CF was first identified in 1989.

CF causes the production of thick, sticky mucus that clogs the air passages of the lungs, leading to persistent infection and permanent lung damage due to scarring.

Some 94% of CF deaths are due to respiratory failure. With improved medical care, the outlook for patients with CF has been improving progressively.

Currently, individuals with CF have an average lifespan of approximately 30 years. Projected survival for babies born with CF in the 1990s is 40 years. Women at all ages have slightly lower chances of survival than men, for reasons that are still unclear.