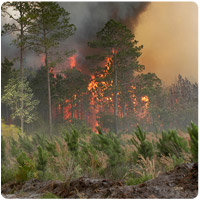 The study published in the Journal of Geophysical Research is the first to look at how bad the air is going to get as forest fires increase in the future. The scientists compared information on forest fires over the past 25 years. Once this information was combined with a standard climate model they estimated that, by the 2050s, forest fires will become as much as three times more common.

It is already well documented that particulate matter produced by forest fires can cause serious respiratory problems and irritate the lungs. The researchers took this into consideration and created another computer model to show the effect of forest fires on the amount of carbon emissions they produced.

In order to work out the emissions many variables had to be taken into account including: the types of wood involved, how hot the air was, how much fuel was lying around on the ground and more. Their findings estimated a 40 per cent rise in lung-irritating particles as a result of forest fires by the 2050s.