People with cystic fibrosis (CF) recover from exacerbations equally well if they are treated at home or in a hospital, according to researchers from Johns Hopkins University, Baltimore, MD, USA. 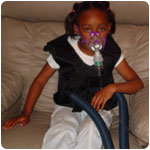 CF patients are regularly required to clear the airway of mucus from their airways and take antibiotics in an attempt to sustain a normal lifestyle; however, their lung function rarely returns to normal. It is vital to find out the best way to treat worsening symptoms.

Outpatient intravenous antibiotic therapy is becoming increasingly popular because of its advantages over hospitalisation including; fewer absences from school or work, less disruption of family life, decreased costs per treatment course and high patient satisfaction.

American researchers studied 1,535 individuals with CF, from 755 families, to find out how lung function altered with antibiotic treatment.

The researchers found that periods of worsening symptoms were followed by long-term declines in lung function, regardless of whether antibiotics were administered in the hospital or at home, and the optimal duration of antibiotic therapy was 7–10 days, compared with the current practice of 10–21 days.