The drug-resistant strain of Pseudomonas aeruginosa was first detected a decade ago in the British city of Liverpool. But since the superbug migrated to Canada, physicians have discovered just how deadly it can be to people with cystic fibrosis.

In healthy people, the bacterium causes little more than a rash but in people with cystic fibrosis (CF), it can lead to chronic lung infections as the bacterium lodges deep in the lungs. 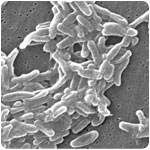 The researchers have discovered that drug-resistant Pseudomonas aeruginosa can triple the risk of death in CF patients, which suggests that hospitals must screen CF patients for the bacterium and implement stringent infection control.

According to a 3-year study carried out in CF clinics in Ontario, Canada, the superbug attacks 7 out of every 1,000 CF patients each year. This equates to 25 Canadian CF patients per year and of these, 10 per cent could die.