Founded in 1990, the European Respiratory Society (ERS) is a nonprofit making, international medical organisation with over 7,000 members from 100 countries. It is the biggest society in Europe in its field.

The aim of the ERS is to promote and improve lung health in Europe through research, education and advocacy.

The ERS Congress is Europe’s biggest annual scientific gathering in respiratory medicine, with an attendance of over 16,000 delegates. This event provides a platform for important improvements in the treatment of lung diseases. In 2007, the ERS will meet in Stockholm, Sweden from September 15-19, 2007. 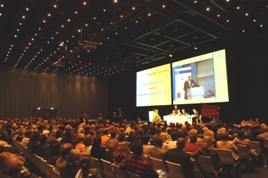 The ERS produces a number of publications for scientists, doctors and health providers in Europe to keep them up to date on the latest research and developments in lung health and disease treatments:

Breathe is the official educational journal of the ERS school.

The ERS offers training and research fellowships. These fellowships provide money for those involved in research related to lung health.

The ERS supports the further development of lung health in Central and Eastern European Countries. More than 200 physicians and scientists from these countries are given support to attend the annual congress.

The ERS is actively involved in lobbying governments, grant agencies and political bodies to provide better lung health in Europe. A recent success was the launch of the:

This publication was officially launched on November 25, 2003 at the European Parliament in Brussels and was produced in conjunction with the European Lung Foundation (ELF). It provides the first comprehensive survey on respiratory health in Europe. It is also available in an abbreviated version: