On 14 October 2010, the first global lung function testing event took place to raise awareness of lung health and disease and encourage as many people as possible to get their lungs tested.

The ERS/ELF World Spirometry Day 2010 campaign has been awarded the PRCA Health and Wellbeing Award at this year’s PR-equivalent of the Oscars.

The ERS/ELF worked together with Munro & Forster to deliver a PR campaign, which encouraged healthcare professionals in Europe to organise lung function testing events for the public.

ELF Chair Monica Fletcher said: “We are delighted that the WSD 2010 PR campaign has been recognised with this award. It was great to see what could be achieved in a relatively short time scale with a limited budget. We would like this award to inspire us to make an even bigger noise across the globe in 2012 and we hope that more people that ever will join us in the race for healthy lungs.” 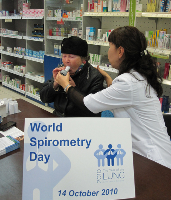 The event was a huge success and saw a final total of 102,487 tests achieved from a minimum of 490 events in 64 participating countries (as reported).

Explains everything you need to know to run an event:

Files can be downloaded, edited and personalised using either graphic design software or Microsoft Office PowerPoint.

The correspondence pack contains templates for a questionnaire and a letter to GPs.

The letter for GPs is sent when an individual produces abnormal test results. This encourages that individual to seek further advice from their GP and to gain the correct treatment if necessary.

The patient information pack contains factsheets that people can read while they are waiting to take a test. The spirometry factsheet explains the lung test in more detail.

Our spirometry video also gives people a good idea of what to expect if they take a test.

The media toolkit contains a main press release and factsheet that can be sent out over pan-European news wires and used in local campaigns to promote your event.