Drug-induced lung disease is not a single disease but, rather, a complex clinical entity in which a patient with no previous lung disease develops respiratory symptoms, changes on chest x-ray, worsening respiratory function, histological changes, or numerous of these findings in association with drug therapy.

More than 150 drugs or drug categories have been described as causes of lung disease; the mechanism is rarely known, but many drugs are thought to cause a hypersensitivity response. Some drugs (eg, nitrofurantoin) can cause different types of injury in different patients.

Depending on the drug 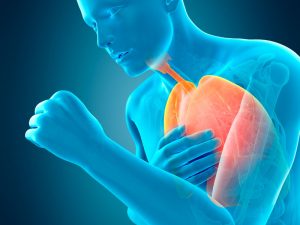 In the initial stage of the disease, an accumulation of leukocytes, macrophages and high-protein fluid is generated in the interstitial space, which causes inflammation. If the inflammation persists, scar tissue (fibrosis) can form to replace normal lung tissue. With progressive destruction, the alveoli are replaced by thick-walled cysts (defined as honeycomb due to the resemblance to the cells of a beehive). The consequence of these changes is termed pulmonary fibrosis.

Although the various interstitial lung diseases are distinct and originate from different causes, they share some manifestations. All of them reduce the ability to transfer oxygen to the blood and all stiffen and constrict the lungs resulting in shortness of breath and coughing. However, the ability to eliminate carbon dioxide from the blood is usually preserved. 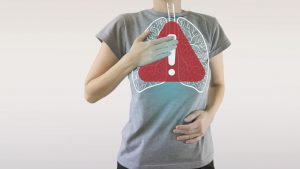 Pulmonary function tests often show an extreme reduction in the volume of air contained in the lungs. Arterial blood gas analysis allows you to measure the levels of oxygen and carbon dioxide present in arterial blood and determine the acidity (pH) of the blood.

To confirm the diagnosis, a small portion of lung tissue can be taken for microscopic examination (lung biopsy), using a procedure known as fiber optic bronchoscopy. This type of lung biopsy is called a transbronchial lung biopsy. In many cases, it is necessary to take a larger sample to be surgically removed, sometimes using the thoracoscope (a procedure called video-assisted thoracoscopic lung biopsy).